The union between the two cities was a forerunner of something which became popular in the mid-twentieth century, with many cities worldwide ‘twinning’ to foster international relationship building, information sharing and mutual aid.

The Town Twinning movement started very soon after the end of the Second World War with the passionate support of mayors and citizens who vowed that Europe should never be torn apart by war again.

The aim of Town Twinning was to establish understanding and friendships between former foes. It was, and still is, designed to bring ordinary people together in order to foster tolerance and contribute to world peace.

Bridgend Town Council has an official town twinning partnership with the towns of Villenave d’Ornon (South West France) and Langenau (South Germany). It also has a friendship link with the town of Hechtel Eksel (Belgium).

In March 2017 a decision was made by Bridgend Town Council to devolve friendship, social and individual twinning activities to the Bridgend Town Twinning Association whilst retaining Civic responsibility for the official links.

The Town Council is keen to maintain its well-established links with the Twin Towns. Civic Invitations to The Mayor and Councillors are received and administered by The Town Clerk. 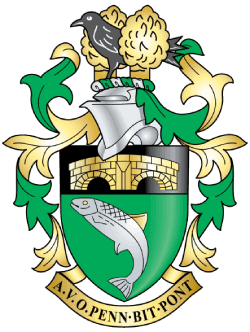